Create an Account - Increase your productivity, customize your experience, and engage in information you care about.

The Queen of the Copper Camps
By Jennifer L. Graeme

In 1877 a reconnaissance detail of army scouts and cavalrymen was sent to the Mule Mountains to search the area for renegade Apaches. What civilian tracker Jack Dunn found instead were signs of mineralization indicating the presence of lead, copper and possibly silver. The first mining claim was staked in what would later become the City of Bisbee. The filing of this claim, and a multitude of others filed by George Warren, sent prospectors and speculators scurrying to the Mule Mountains in hopes of striking it rich. Numerous rich ore bodies were located and Bisbee soon became known as the "Queen of the Copper Camps"
Bisbee continued to grow and prosper. 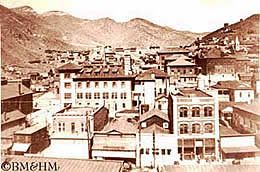 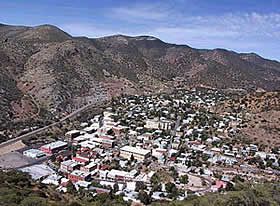 A Growing City
With prosperity came an increased population and the need for sanitation, clean water, medical care, building codes and fire protection. On January 9, 1902 a city charter was approved and the City of Bisbee was incorporated. A temporary city council was formed and went to work on these sorely needed civic improvements. In 1910 the city was considered the largest in the territory, with over 25,000 people. The Cochise County seat was relocated from Tombstone to Bisbee in 1929.
Depleted Reserves
During almost a century of mining, 8 billion pounds of copper, 102 million ounces of silver and 2.8 million ounces of gold along with millions of pounds of zinc, lead and manganese were produced. By 1974 ore reserves had been depleted and December brought the announcement of the impending closure of mining operations in Bisbee. Phelps Dodge curtailed open pit operations that year and ceased underground operations in 1975. It appeared as though the queen was about to be laid to rest.

Real Estate Collapse
With the departure of its industrial base, the real estate market in Bisbee collapsed as hundreds of homes went up for sale. The availability of cheap real estate drew retirees, "hippies" and eventually a new group of speculators. These new residents purchased property and slowly began to contribute to the renovation of the city.

Bisbee of Today
The Bisbee of today is a well-known artist's community whose architectural and historic heritage has been preserved. Located at the center of the natural and historic beauty of Cochise County, the city has transformed itself into the ideal spot for tourism. These benefits combined with "the most perfect year round climate" make it an attractive place to visit and a great place to call home.
Agendas & Minutes
Employment
Online Bill Pay
Report a Concern
Permits & Code Enforcement
Forms